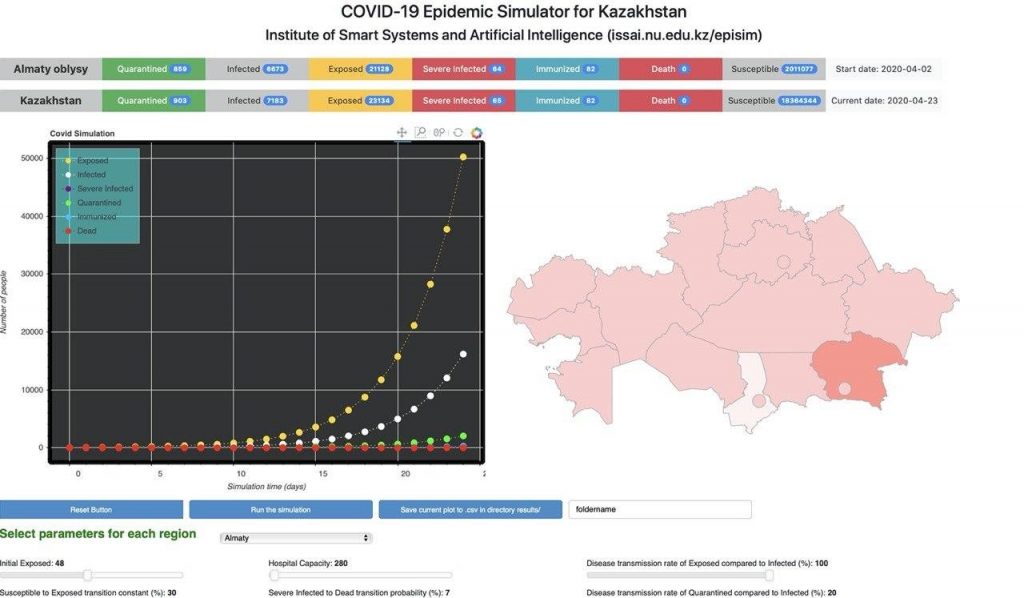 The current world is struck by the global pandemic caused by the Coronavirus disease – COVID-19. The outbreak has initially emerged in the city of Wuhan, China in late December 2019 and continues unabated in most countries of the world. In Kazakhstan, the first cases have been confirmed on 13 March 2020 and the number of infected people continues to rise.

To help in this time of crisis, the ISSAI team of Nazarbayev University has developed a stochastic epidemic simulator for the Republic of Kazakhstan (RoK). In the simulator Kazakhstan is represented as a graph of 17 connected nodes (14 oblasts and 3 cities of Republican significance), where each node runs a separate SEIR (Susceptible, Exposed, Infectious, and Recovered) epidemiological model. Simulator shows the spread of the disease based on various scenarios consisting of different parameters such as initial number of the exposed in a node, daily quarantine rate of the exposed, hospital capacity of a region, daily infected to severe infected transition rate, and more. The parameters can be adjusted for each region. Depending on the parameters, the simulator can output results for different scenarios and the spread of the disease can be visualized on an interactive map.

The simulator was calibrated with real-world experiments based on real RoK data, ranging from population density to health care capacity for each region to predict the dynamics of spread of COVID-19 in Kazakhstan. The spread of the disease between different geographic regions of RoK was modeled based on air, railway and highway connections between nodes.

The simulator can be used to visually show the current situation and project the ongoing impact, which can be used to facilitate government decision-making and allocation of resources. In future, the use of the simulator can enable the modeling of disease suppression and mitigation measures, such as limiting travel and quarantining a region, on both localized and national basis. The simulator can also be used to estimate the impact and duration of the epidemic over time, based on a range of policy measures, and thus allow better state planning to reduce the impact.

ISSAI has prepared a series of video tutorials such that the simulator can be used, adapted, and improved by others. You can get further information from the main webpage of the project (https://issai.nu.edu.kz/episim/).